The WordPress.com stats helper monkeys prepared a 2015 annual report for this blog.

The concert hall at the Sydney Opera House holds 2,700 people. This blog was viewed about 21,000 times in 2015. If it were a concert at Sydney Opera House, it would take about 8 sold-out performances for that many people to see it.

After a couple of days of testing and fixing bugs in the SailPi adaptation for SailfishOS version 2.0.0.10, I’ve managed to return the status of the adaptation back to normal. Things like mouse and keyboard work out of the box, provided you configure the hardware keyboard layout in the Settings and you have the correct driver for your mouse.

Here is the image file:

Finally I have managed to make it so that one can make a SailPi image from a .ks (kickstart) file and use it to create a custom image by themselves. The process is quite straightforward for those who have a SailfishOS SDK or familiarity with Mer Platform SDK. Either SDK will have the necessary tools to complete this guide.

Start with downloading the .ks file from this link. Please do note that its a raw text link to a gist, so I suggest you do a curl -L -O to that inside the SailfishOS SDK command line.

Then issue the following command, be sure to be inside the shared directory as if you issue this command inside the SailfishOS SDK default home directory, you will very quickly run out of disk space!

This will result your actual image to reside in this directory “sfos-rpi2-1.1.9.28”, with filename “sfos-rpi-sda.raw”. Then as normally with any Raspberry Pi image, choose a disk image writing software to write it to a MicroSD card. Insert to Raspberry Pi 2 and you should boot to first run setup of SailfishOS!

Thanks for reading and have fun!

Link to latest 1.1.9.28 release <- Use this to replicate my status, will boot to graphics, use this for official touchscreen, first run tutorial will be portrait!

It has been really busy week doing the Library of Babel proof of concept code for file uploads and preparing the SailPi tablet for prime time presentation at Mikkeli EU codeweek, I will link Mikkeli hacklab event coverage details where you can see me hacking it to use the RPi2 GPIO pins via a Python SailfishOS application.

Overall, the concept of a completely DIY tablet is quite enticing. Replacing of hardware is quite difficult to do these days, but on the SailPi tablet concept, quite much about everything is replaceable. SailfishOS is also proven to be very flexible, it displays well on both the official touchscreen, Adafruit PiTFT 3.5″ touchscreen and finally, any HDMI capable monitor or television can also do it. Issue is in the EGLFS driver, courtesy of Martin Brook’s (vgrade) excellent earlier adaptation for the original Raspberry Pi, running Mer and Nemo Mobile. This is not in any way his fault, since rendering EGL using the VideoCore is far from trivial, especially when adapted to Qt 5 libraries.

It is indeed possible to buy a cheap Chinese tablet for less than 100€ but the concept is what matters (at least to me it does). Flexibility of SailfishOS’s software combined with RaspberryPi2 hardware capabilities is an excellent combination. It is possible to do the setup even cheaper too.

The powerbank feature comes handy, especially when using the touchscreen. This gives 2 power inputs for the tablet, meaning that while charging the powerbank, you can use another charger as backup without downtime, just have the charger on the RPi2 and disconnect the powerbank from touchscreen.

Now some pictures (thank you aple for providing the camera + hot glue gun, Atte for a couple of wires and Markus for gluing the frame and powerbank extra support together, each and everyone from Mikkeli Hacklab for an excellent event):

Front view after a little bit misaligned gluing but no worries, I got some fingerprints to go with it 😀 !

Backview with the powerbank attached.

Top (lost orientation, but I guess its top) views showing the GPIO ports not too badly blocked. The powerbank is leaning on the wires somewhat tightly.

But overall, the EU Codeweek even that was organized by Mikkeli Hacklab crew has been great fun, with talks on Open Finland Challenge by Teemu Ropponen (Open Knowledge Finland) and on API:Suomi by Jarkko Moilanen, I unfortunately could only attend on the API:Suomi event, where Jarkko provided a very interesting presentation on the current status of eg. APIOps movement and founding the Mikkeli API:Suomi organization with Mikko Lampi (also a founder and president of Mikkeli Hacklab).

Looking forward to organizing an event like this at Kuopio Hacklab, with lots of cool stuff to create with the crew and other volunteers. I thank the organizers and all the event participants for a great event!

Hello for all SailPi followers!

This is the post that you probably have been waiting for a long time now. Ever since SailPi was started, this has essentially been the hilight, getting the SailfishOS 2.0 UI running on the Raspberry Pi 2 SBC! My testing has now been successfull and I can confirm that all the features that Jolla has been developing thus far have been working flawlessly.

I am still waiting on the official release to possibly re-do the image before its release. Please stand by and keep sailing! 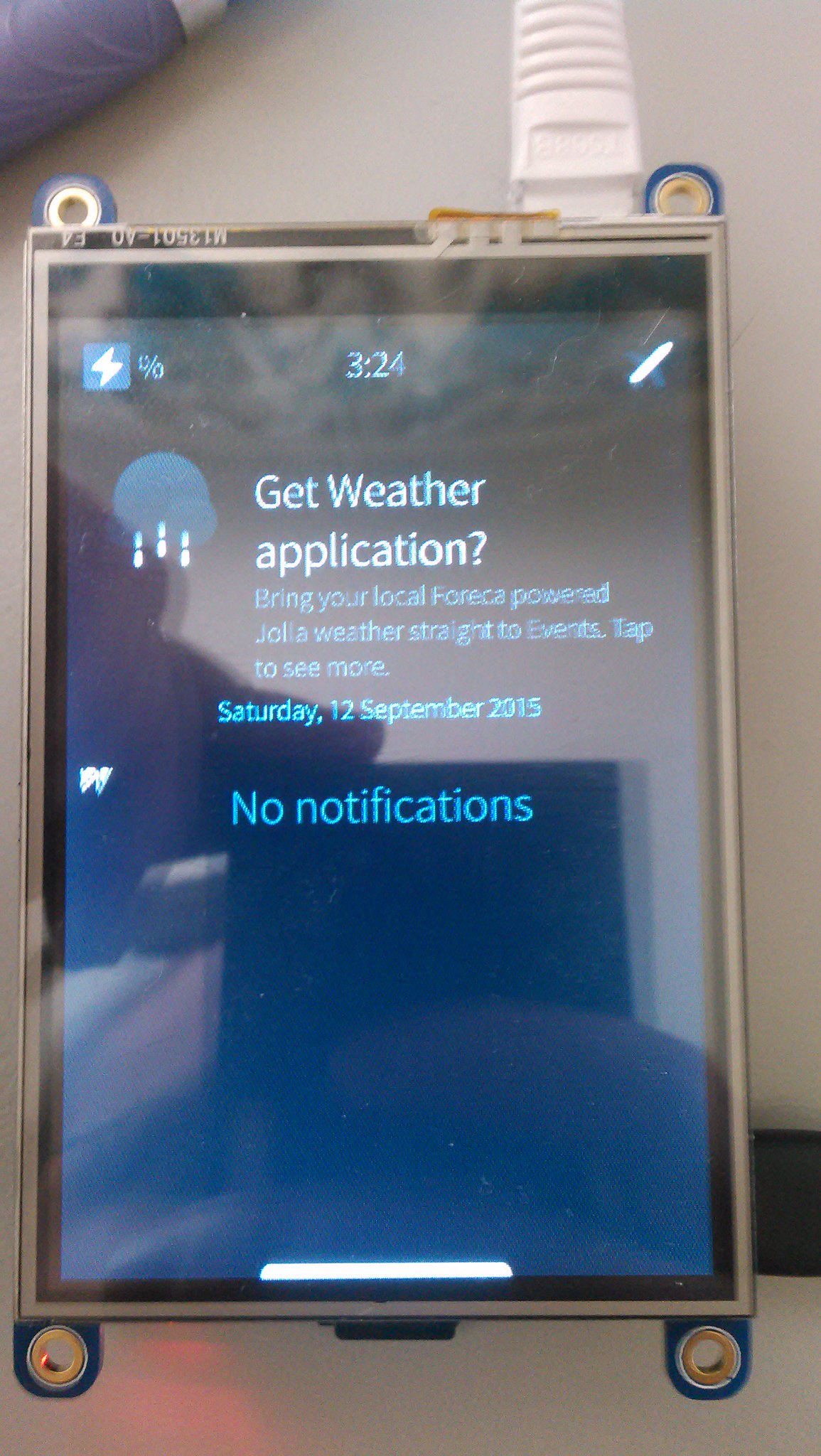 On this page we will be posting tutorials and updates for Sailfish OS running on Raspberry Pi 2!